How She Went Blind

Angel went to the vet and had a yearly check-up which went very well as always and the only thing that needed to change was her weight. She could stand to lose a few pounds, like most of us girls (LOL). Well, I thought I was helping her and I switched her to Beneful Healthy Weight and she did drop several pounds in the 6 months that she was on this food. In the meantime, I would stop by and quickly have her nails clipped and weight checked, the helper at the vet’s office would say if she had lost a pound or two and we would leave thinking that was a wonderful thing.

It all began 6 months later when Angel began getting sick and vomiting when she tried to eat the Beneful. I took her in exactly one year ago today, on March 13, 2013 and the doctor saw her weight loss (9 lbs in 6 months) and wanted to check her sugar. I reminded him that he had checked it the day before we began Beneful and it was perfect. BUT he insisted we re-test it since she was showing signs of high sugar. That is the day that it seemed as if our world came crashing down upon us. Her sugar was 460 or 470 (I cannot recall the exact number off the top of my head right now). Anyway, the doctor informed me that I was going to have to begin giving her insulin twice a day and I nervously responded that there was absolutely no way. I used to pass out as a child at the sight of a drop of blood and/or needle and I could not do this BUT he calmed me down and said for her to continue to live a good quality of life, I would have no choice but give her the insulin. He further warned me that she would be blind within one year. I cried all the way home and felt so helpless and hopeless but I knew I had to do what was best for my baby girl.

Within 6 days, Angel was walking into every wall in our house and obviously could not see anything. I took her back to Dr. Favaloro on March 19, 2013 and he said it was a first for him. He said that in all of his years of being a vet (I think he said close to 30 years), He had NEVER seen a dog develop cataracts so quickly. He gave me my options, for her to be blind the rest of her life or take her to an eye specialist for cataract surgery. I chose the 2nd option because I could not bear the thought of her being blind for the rest of her life if there was a chance that I could give her sight again.

I contacted the Auburn University Veterinary Hospital and took their earliest available appt with the ophthalmologist which was for April 5, 2013. During this visit, we were given hopes that one eye was a candidate for cataract surgery so she could at least have one eye to provide her eyesight once again. Her left eye was a dry eye and not considered a good eye for the surgery. She was put on eye drops to get her eyes in the best condition they could be in. Again, I cried all the way home while driving 3 ½ hours. It was the saddest news I ever heard in my life. But after being given time to accept that at least she would have one seeing eye, I was able to accept it although it was still very hard to accept. Before surgery could be performed, our first step was to get her sugar stabilized. It only got worse after this appt……. On the morning of April 19th, 2013, Angel’s eyes were blood shot red and we were out of town in Orlando Florida. I contacted both her reg doctor and the doctor at Auburn. I was told that I did the right thing by discontinuing all of the previously prescribed eye drops because we did not know which one was causing a reaction or if she had also developed Glaucoma. I was told to take her to her reg. doctor when we arrived back in town. I took her to her reg doctor on April 25th and she was diagnosed with Glaucoma in both eyes. Sadly this meant surgery was no longer going to be an option. I was also warned that if the Glaucoma drops were not effective for her, we may have to be faced with removing both eyes. This news was just unbearable, I could not believe all that I was hearing. I had to get another opinion and that meant another 3 ½ hour drive back to Auburn. We took her back to Auburn on May 14th and the bad news was confirmed. Her pressure remained very high and by this time, Angel wanted to close her eyes all the time, she kept them squinted closed. They were blood shot red and you could see the pain they caused her. We was also told that in order to remove the pain from her, we would have to remove the source of the pain which of course, was her eyes. The pain of Angel’s eyes were successfully removed on May 29, 2013.

Honestly, at first I thought I made the worst decision of my life ~ I can tell you that I cried night and day for weeks. Angel seemed so frightened and walked with her puggy tail curled down all the time……even in “her” own yard. She would stop and I would pick her up and cuddle her in my arms and tell her that she was a good girl and everything would be okay. This tore my heart apart and I never thought it would get better.

I had always done medical transcription work and worked from home so that was a HUGE plus to be able to spend every minute taking care of her and just re-assuring her that she was not alone. As the weeks past (slowly), Angel gained more and more confidence and that puggy tail soon began to curl up once again. I have never in my life been so happy to see a dog’s curly tail but I can tell you this made me so proud. She seemed to be a slow learner and this was a surprise to me but it took a good 6 months for her to “map out the house” and learn to get around.


Now she literally trots from our living room to the kitchen to sit down on the kitchen rug in front of the refrigerator for her meals. She is once again a very happy pug and I am so blessed to have her in my life. Right now, as I type this for all of you, she is curled up in the same office chair behind me. She has done this since she was a baby (although it seems uncomfortable), always wanting to be close beside me so I just learned to sit close to the edge of the chair and let her sleep behind me with her head on the chair arm…..Hugs from Angel, JOIN OUR TEAM

Her Advice To Blind Pet Owners

Most importantly, do not think or feel that their life is over because it is not over, it will just be a new beginning for them and for the family members. It takes time for them to adjust to their new lifestyle (Angel took a good 6 months to “map out the house”) but before you know it, they will surprise you by yipping and barking when you come back home and let them know you are there. Here are a few tips:* Do not move furniture and/or re-arrange your house. Keep their food/water dish in the same area.

* Talk to the pet more than you did before. We speak to Angel every time we enter or exit the room. Our house rule is: When someone enters, they speak to Angel to let her know who it is entering “her” house. When we leave, we give Angel a treat and tell her to be a good girl and we will be back soon. That way, she knows we are leaving and she will be alone for awhile. She likes to hear the tv because otherwise it is to quiet in the house and she will bark at every noise she hears, so we leave the television on even when we leave the house.

* If you have to administer insulin shots, we give it to Angel when she is eating so she does not pay us any attention, she is to involved with eating and does not even notice.

* I make a clicking noise and/or pat my leg if I want or need Angel to follow me from room-to-room.

* If your pet enjoyed playing with toys before going blind, buy toys that make a noise so they can continue to enjoy their playtime. (Angel has always been more of a couch potato so she just cuddles with stuffed animals/blankets).Just provide your pet with lots of love and attention. Make sure you have lots of patience because everyday is not going to go as smoothly as others. It will sometimes seem as though your pet is confused and they will seem to bump into every object in the room but just remember that this is a huge adjustment. Pretend you woke up one morning and had a blind-fold on your eyes for the day, I bet you would be confused too and you would probably not get too many chores done during the day. You would probably sit on the couch and not do anything if the truth is known, so be understanding of their situation too because they did nothing to deserve this and it is certainly not their fault.

They will just require extra love and care but their quality of life will continue to be a good one as long as you are there to show them the way of life through your eyes.They see with their heart, not with their eyes! 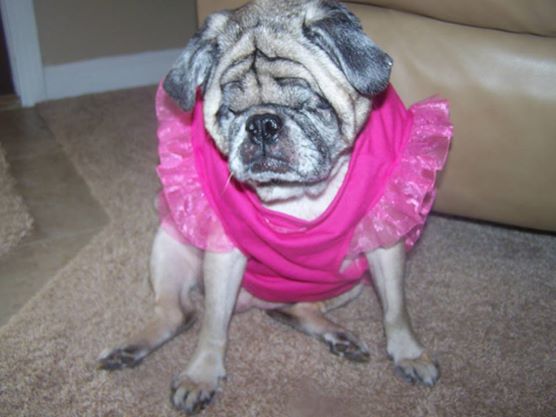